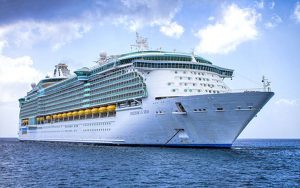 The name “Freedom” takes on a different meaning when it comes to this Carnival cruise ship. Carnival Freedom gives its guests the ability to travel through time by focusing on a time travel theme. The rooms depicting everything from ancient Babylon to the 19th-century Victorian era and even the 1970s disco period aboard this luxury cruise ship.

The ship contains an extraordinary 22 bars and lounges. Each themed for different eras. These include a 1950s sports bar, complete with vintage memorabilia, and a 1940s-style Habana Cigar Bar. Studio 70 Dance Club puts a focus on the heydays of Disco, with its black walls and disco balls. While a piano and jazz bar display a classic 1930s look.

One of the largest perks to the Freedom cruise ship is the family-friendly environment. Allowing you to book a cruise for the whole family with no worry. The ship contains four swimming pools, one of which is surrounded by a pair of ginormous hot tubs. For those looking to be a little more active in their fun-seeking, a three-deck-high water slide twists and turns for over 213 feet.

The Children’s World playroom encompasses a 4,200 square-foot entertainment complex equip with an arts-and-crafts station, video wall, computer lab, PlayStation games, and lots of toys for younger children. Tweens have their own entertainment area, as do teens. This area features a soda bar and dance floor, as well as a huge video game arcade with air-hockey tables.

The ship departs from Galveston, Texas, and sails to the Carribean or the Panama Canal. Cruise lengths vary from 6-9 days to 10 plus days depending on the route chosen. Prices range from $400-$600 per person for shorter cruises, with longer cruises costing between $1400-$1600. The Carnival Freedom ties in everything you look for aboard a family cruise: luxury, affordability, and family-entertainment, so book your cruise now.