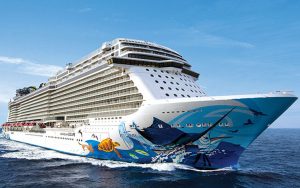 Built in Germany and delivered in October 2015, the Norwegian Escape is among the Norwegian Cruise Line’s largest class of cruise ships.

The Norwegian Escape has since run exciting Miami cruises. Destinations including the Bahamas, as well as the Eastern and Western Caribbean islands. That is almost the only thing that is standard about this mega-ship, though. Have you heard of a “luxury ship within a ship”? Norwegian Cruise Line pioneered this concept, called The Haven, in which suites and accommodations are dramatically upgraded and separate from the rest of the ship. Keycard access lets these passengers enjoy an exclusive three-story courtyard, a private swimming pool and whirlpool, and a private sun deck and outdoor dining room.

Norwegian Cruise Line Corporation Ltd. is a cruise line company is coming out of Miami and currently based in Florida.

The Norwegian Escape cruises from Miami FL. This ship typically cruises to port destinations including Saint Thomas, BVI, and Nassau, Bahamas. In 2018 the home port will be designated as New York City with 7 night round trips to Bermuda and the Eastern Caribbean.

Of course, you do not have to stay in The Haven. This boat features plenty of amenities beyond those ultra-private options. Eleven complimentary dining options are sprinkled throughout the rest of the boat, many of which have set industry standards for their incredible menus.

The ship promenade deck also features Jimmy Buffett’s very first Margaritaville location at sea. If you are a fan, you are sure to love the 5 O’Clock Somewhere Bar that sails across the sea. A wine bar, as well as a brew house, round out the ship’s drinking options.

From waterslides to rope courses and more, this boat also features plenty of activities for anyone who doesn’t want to relax. A pool deck atop the ship features a sun deck, double-decker bar, and two large LED screens. Kids can also stay busy with their very own waterpark and other play spaces.

Norwegian Cruise Line is proud to offer the Norwegian Escape as one of the industry’s very best offerings. This boat is truly top of the line and you’re sure to have a one-of-a-kind vacation upon boarding!