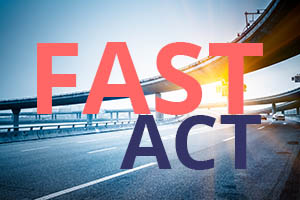 While you generally don’t need a passport to travel on these transportation systems throughout the country, the bill also includes an agreement that relates to U.S. passports. This new passport rule can interfere with the passports of a certain group of people.

How Do Passports Relate to the FAST Act?

Along with customs fees and other areas, new passport guidelines were attached to the FAST Act as a way to help pay for the transportation updates without resorting to a new gas tax to cover the cost. These new rules also give the government power over whether or not you can have a passport. This rule will affect you only be if you have a tax debt of more than $50,000. The government will then send a notice of a lien or levy.

This rule could impact you when you go to get a new passport or even if you already have one. This new law gives the State Department the right and the power to deny you a passport, take away your passport or limit its use if you fall into this group of people with the IRS.

Considerations on Taxes Connected to Passports

Although the idea of connecting passports with tax collection was to discuss before, it didn’t pose a problem with the passing of the FAST Act. There are certain aspects to consider the significance of this rule. In 2016, people from certain states might even need to use their passports to fly within the country if their state’s driver’s licenses and state IDs don’t meet certain standards, so the new passport could impact national travel.

Nonetheless, the government won’t go after the passport until other avenues for collecting taxes are explored. Also, there are some exceptions, including if you are paying off your taxes through an IRS installment agreement or if you need an emergency passport – to come back to the United States, for instance.