PassportGetting Your Passport During the Government Shutdown

Getting Your Passport During the Government Shutdown 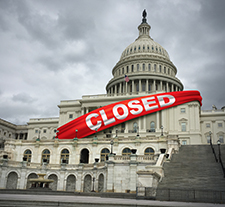 While most of the federal government is shut down, the State Department is continuing to provide passport and visa services due to a combination of separate funding and border protection being classified as an essential service. The State Department’s processing time remains at about four weeks for regular applications. Two weeks for expedited applications. Some passport centers are experiencing some delays.

The United States government has shut down 21 times since 1976 with the latest being the shutdown of December 2018 – January 2019 this was the longest shutdown in United States history that lasted 35 days surpassing the previous 21-day shutdown of 1995 – 1996. Each time there is a shutdown some critical government services are affected. The 35-day shutdown led to almost 380,000 federal workers being furloughed and additional 420,000 workers being required to work without pay.

Are Passports Affected During the Government Shutdown? Yes, but there is sometimes a delay in processing the passport application.

Usually, post offices would be open during the government shutdown but passport agencies that expedited passport applications for travelers who are traveling within fourteen business days would sometimes be close if they are in Federal building.

Which Passport Offices is Open During the Government Shutdown?

While all post offices remain open because the U.S. Postal Service is self-funded, many federal buildings are closed. Passport centers within these buildings that use furlough federal employees may close. As the situation develops, additional locations may close and wait times may increase at the remaining location. If the State Department must scale back its number of employees, processing times may increase.

Post Offices may continue to be the best option for some. But in some areas, especially major cities with large immigrant populations, waiting times can be several hours. The use of a private expediting company maybe even more desirable because, in addition to providing the usual help with the expedited application process, they will also be in constant communication with the relevant authorities regarding further developments. This may help avoid trips to a suddenly closed location or the need to wait at length at one of the few open locations. While private passport expediters do charge a fee on top of the regular passport fees, for many it may be well worth it.

Getting a Passport During the Government Shutdown

Getting your passport during the government shutdown is no different than when it is open. You must gather your documents that pertain to a passport. The documents will determine the type of processing. If you need a new passport, replace an expired or lost passport, or a minor’s passport, you must submit the proper form.

How to Submit Passport During the Shutdown?

Once you have your form and documents together, you can now submit your application at an acceptance facility if the facility is in a federal government building it would be close it would be better to try a local post office instead. Even with a government shutdown, the cost for processing will be the same. However, the processing time may be longer than the normal 4 to 6 weeks if you choose standard processing. The expedited processing cost will also be the same. The post office charges a $60 for this service.

The Alternative to Get a Passport During the Government Shutdown?

So, even with a government shutdown, you can still get a passport to travel abroad. Unless the government stops processing passport applications, you will not get a passport. For now, the processing continues and if there should be any change in the near future, we will provide that information to you.