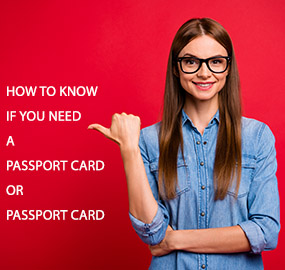 In 2008, the United States government introduced a passport card, which can be used to travel to some countries. This has, unsurprisingly, caused a lot of confusion for individuals who are getting ready to travel.

Knowing whether you need a passport book or a passport card is relatively simple and can be explained in just a few simple steps.

So which do you need for your upcoming trip? Read on to find out.

Do I Need a Passport Book or Passport Card for My International Vacation?

It all depends on where you’re going.

You can only use your passport card by air for domestic travel or when you travel by land or sea.

If you’re traveling by land or by sea to Mexico, Bermuda or Canada, your passport card will be valid for entry. You won’t need further documentation to enter via these ports.

Many countries in the Caribbean accept passengers arriving from the US by sea with a passport card, but not all of them. Some countries are still territories of European countries, and therefore, you will need a valid passport to enter them.

The United States government states that you should always check with the cruise line you’re traveling with to see whether the Caribbean country will allow you entry without a valid passport book.

The Passport Card vs. Real-ID

Some individuals may think they need a passport card to fly domestically because their state is not Real-ID compliant. However, it depends on your state and if your driver’s license is already Read-ID compliant. You should be able to check the status of this relatively easily.

If your state does not provide Real-ID compliant driver’s licenses, you will need an alternate form of identification, such as a passport card after October 2018 for domestic air travel.

The purpose of this new system is to further prevent terrorists from boarding an airplane.

How Much Does the Passport Card Cost?

A passport card costs $65 for first-time adult applicants. Those under the age of 16 will pay $50. Renewals by mail will cost $30.

How Much Do Passport Books Cost?

A passport book costs $130 for first-time adult applications. Those younger than 16 will pay $100 and renewals are $130.

How Long Are They Valid?

Can You Apply For Both at the Same Time?

If your driver’s license is not Real-ID compliant and you would like another form of ID aside from your passport book, you can do so. You can apply for both at the same time by filling out the DS-11 form (if you’re applying for the first time in person) or the DS-82 (renewing your passport or ID).

You will merely have to indicate on the forms you are filling out that you would like both forms of identification. The same photo you use for your passport will be acceptable.

How Much Does It Cost to Receive Both at the Same Time?

Why Should I Get a Passport Card?

A passport card is a convenient form of identification. It is sized to fit into your wallet, just like other forms of necessary ID, bank cards, gym membership cards, gift cards, and anything else you cart around with you each day. Because of its convenient size, it makes it easier for you to have it with you at all times.

Many people lose their passports. It is a classic situation for travelers to get to the airport only to find they left their passport at home. With one of these cards, you won’t have to worry about it, especially if you’re traveling domestically a lot.

Instead, you’ll only have to worry about what you’re bringing with you on vacation.

Is It Better to Have a Passport Card?

It really depends on your needs. If you simply travel a lot domestically or live in a non-Real-ID compliant state, it is a good thing to have. If you have no friends and family who live abroad and you don’t foresee an emergency visit across the ocean, a passport card can be all you need.

As stated previously, the ease of use and convenience of it makes it highly recommended, especially for those who will be going on cruises to Mexico or other ports of call that accept the IDs. You won’t be searching your quarters every time you’re disembarking the boat.

Should I Choose a Passport Book or Passport Card?

Visit our blog for more information about United States passports and other travel information.