PassportNeeding a Passport In A Rush: Here Is A Guide On Getting A Rush Passport

Needing a Passport In A Rush: Here Is A Guide On Getting A Rush Passport 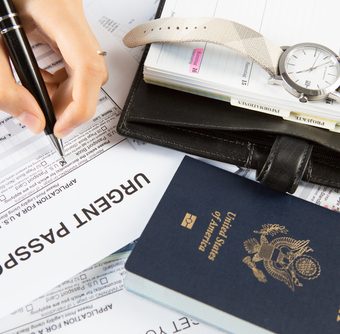 When planning a trip abroad, there is a multitude of things you have to remember to bring and do before leaving home. Sometimes you forget about something as crucial as your passport, whether it’s because they’re expired, have no blank pages left or even because you forgot to get one. You wouldn’t be the first person in this situation and surely not the last, which is why there are several solutions to your problem depending on your circumstances.

After not using your passport for a while you’ve finally taken it out, only to realize it is not valid anymore as it is expired. You think that the whole trip you planned is ruined, but you do have a few options.

While you might have a passport that is not expired, it might not have enough blank pages for stamping. This situation is different than having an expired passport, mainly because of the costs.

Just like with an expired passport, you can get a new passport through the State Department as an emergency passport or through an expeditor as an expedited passport.

You can also go through an expeditor. This process can cost you, but if you are in immediate need of a passport, an expeditor is probably the best way to go about. In both situations, you need to submit form DS-82 to the State Department or expeditor requesting for a renewal. You can also ask for more blank pages in the form.

Don’t Have a Passport

Some of you are going on your first trip abroad and completely forgot to get yourself a passport before traveling. The options you have are the same as the first two cases: emergency passport or expedited passport.

You will be charged in both situations because you are getting a new passport and do not have an existing one which is still valid. While the emergency passport is not as useful and the expedited passport might be more expensive, both options are far better than missing out on your trip abroad.