PassportWhat is a Passport Card and where can it Take Me?

What is a Passport Card and where can it Take Me? 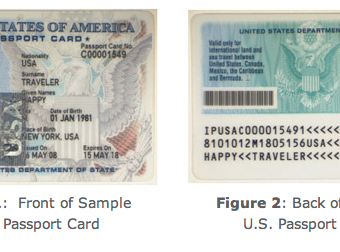 As of October 2018, Americans can visit 186 countries without a visa and just with their passport. As of 2008, the United States government has instituted a passport card, which is the size of a credit card and fits right in your wallet. What is a passport card and where can you go with it? In this article, we’ll answer that question. We’ll also go over how you can apply for a passport card, and which documents you’ll need to do so.

What is a Passport Card?

Where Can I Go with a Passport Card?

Unlike a US passport, a passport card will only allow you entry into certain countries by certain means of transportation. You cannot, under any circumstance, enter a foreign country by air without a passport. A passport card will not suffice. You can enter Mexico, Canada, The Caribbean and Bermuda with your passport. However, your entry must be either by sea or by crossing the border on land. Otherwise, you will need to show your actual passport to enter.

What is the Difference between a Passport Card and a Passport?

A passport card allows you land and sea entry to the countries above. A passport allows you entry to the 186 countries Americans can visit without a visa. Passports are also books with pages for visas and border agents to stamp as you enter countries to visit or live. The first page of your passport will have information about you such as your birthdate and birthplace. You will also have a photo for identification purposes. You may enter any country American citizens are allowed to enter by land, sea or air using a passport. Passports are Real ID compliant and can be used for domestic travel as well. Passports are also larger than passport cards. They cannot be carried in a standard wallet comfortably. Its dimensions are 5″ by 3.5″, or a little bit smaller than a standard 4″x 6″ photograph. Passport cards can fit into a credit card slot in your wallet.

How long is a Passport Card Good For?

How Much Does a Passport Card Cost?

You can have your passport photo taken at almost any post office, UPS store or drug store. The stores are typically staffed with someone who can take the photo for you. Depending on the setup of the store, they may print your photo, or you may do it yourself. This service will typically cost $14 or $15. You can save money by taking your photos at home and printing them off at a store if you so desire. Or, if you have a printer that can print photo quality documents on photo paper, this is also acceptable. The photo must be 2″ by 2″ and taken in the past month. It must reflect your current appearance, be in color, and taken on a white or off-white background. You may not wear hats or uniforms unless it is for religious reasons and worn on a daily basis. It must be free of shadows, and you must face the camera with a neutral expression. This guideline is for both passport and passport card photos.

Should I Get a Passport Card or Passport?

Getting a passport card or passport depends on your needs. If you regularly fly out of the country or plan to at any time soon, you should get a passport. Having one far in advance of any trip saves time and frustration for you and your family. If you don’t plan to travel out of the country or are only planning to drive into neighboring countries, a passport card will suffice. This is especially encouraged if you live in a state where the licenses are no longer Real ID compliant. Hopefully, this article helped you answer the question, “What is a passport card?” For more information on passports and passport cards, visit our website.