How to Replace a Lost Passport?

How to Replace a Lost Passport? 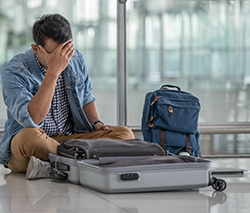 This step-by-step guide to replacing a lost passport would discuss how to replace your lost U.S. passport book or card. If so, the first thing you should do is report the passport loss. This will help the United States Department of State flag your lost or stolen passports before it ends up in the wrong hands or you become a victim of identity theft. How to replace a lost U.S. passport is a simple process once you follow the correct documentation and apply using the DS-11 Application Form for New Passport.

Lost passports are commonly misplaced due to infrequent use. If your U.S. passport was lost or stolen, file the application form DS-64 for Lost or Stolen Passport.   If you found your passport after reporting it as lost, you will still need to apply for a new passport as the recovered passport would be invalid for us.

To Report Your Lost or Stolen the United States Passport

Contact a representative at the following number 1.877.487.2778 between 8 am to 10 p.m. eastern standard time: Monday to Friday except for Federal Holidays.

Requirements for Lost or Stolen Passport

Sign the complete the Application Form DS-64. Be sure to read, sign,  complete, and mail the complete application form to:
United States Department of State Address

Time Frame for Getting Your Lost Passport Replaced

Getting your lost passport replaced is a straightforward process, but it still depends on where and when you file your DS-64 application form. Sometimes a stolen passport could take as much as six weeks or even longer getto back. If you find your passport book after you submit or call the State Department, the found passport will not be valid, and you will need to re-apply for a new passport.

If You Are Traveling in Two Weeks or Less

The required documents are the same as mentioned above; however, you must bring proof of immediate travel for expedited service. In emergencies, you can get your passport in as little as 24 hours.

If You Are Out of the Country

Invalidation of Lost or Stolen Passport.

When you report your passport lost or stolen, the passport will be invalidated and cannot be used for travel.  If the passport is later recovered, you must mail it to the address listed on the form DS-64.

Report of Non-Receipt of Replaced Passport

A replaced passport should be expected ten days from being informed the passport was issued. If for some reason, you do not receive your passport within ten business days, you should report this to the National Passport Information Center.  If you do not report the passport as not received for a period of 90 or more days, you will need to re-apply for a new passport.

Sorry for all the random copies for this question. My account wasn’t showing that the question was going through.

I lost my passport so I don’t have the passport number what do I do?

I have to replace a lost passport but I don’t know the passport number for the DS-64.

Hello, in order to expedite you must have international booked confirmed travel plans reflecting that you are leaving in 14 days or sooner. There are two ways to expedite you can expedite at a regional office or hire a third party expediting service. You must have an apt at the US Department of State, if one is not available or you do not live near one you will need to hire a third party expediting service, and they do guarente their time frame! Expediting fees vary. Both options offer a 24 hour turnaround

I have lost my passport and live in St Albans Vt. Is there a way to expedite this in person at the passport office here

My daughter lost her passport but it expires in December. Do we need to follow steps to get a replacement or can we apply for a renewal?

I got a passport, back in 1978, it has since been lost and I know it has expired by now. I am ready to start traveling again, how do I go about getting a new or renewed passport, after so much time has passed?

Hello, you must appear in person at an acceptance facility such as a post office/county clerk’s office. You will need a DS 11 and DS 64 app along with your original/certified copy birth certificate, passport photos, passport fees ($110 plus acceptance agent fee of $25), driver’s license and any original/certified name change documents (if needed)

What specifically are the “supporting documents”?

Hello, you must appear in person at an acceptance facility such as a post office/county clerk’s office. You will need a DS 11 and DS 64 app along with your original/certified copy birth certificate, passport photos, passport fees ($110 plus acceptance agent fee of $25), driver’s license and any original/certified name change documents (if needed)

What do I do if I am applying for a passport. My previous one is expired and I can’t find it .

Hello, you must appear in person at an acceptance facility such as a post office/county clerk’s office. You will need a DS 11 and DS 64 app along with your original/certified copy birth certificate, passport photos, passport fees, driver’s license and any original/certified name change documents (if needed) Fee $110 plus $25 acceptance agent fee

Hello, you must apply in person for a lost passport using a DS 11 and DS 64 app

I lost my passport 17yrs ago.. never had it replaced.. should I apply for a new passport or lost passport?

you must appear in person at an acceptance facility such as a post office/county clerk’s office. You will need a DS 11 and DS 64 app along with your original/certified copy birth certificate, passport photos, passport fees, driver’s license and any original/certified name change documents (if needed)

I know my passport is somewhere in the house, but I can not find it and I know its about to expired. Can I just get a new one?

How much is the fee?

hello, you can apply for a renewal passport and will be issued a new passport number

I didn’t lose my passport but I lost the folder that I was holding a spare customs (US) paper while going through customs, which has my passport number (as well as the additional info required for the paper). There’s a chance that it was just thrown away but I don’t know for certain. Should I request a new passport?

Hello, you will need an emergency expedited lost passport please visit the link below as the prices vary http://www.uspassporthelpguide.com/emergency-passport/

Hello you can call the airline and let them know you have a passport in processing, you then can book the trip over the phone.

Hello yes you can leave that information blank, some people have copies of their passports which let them still have the number. It is not a big deal if you do not know the number. You will have to apply for an expedited lost passport.

You will be applying for a lost passport, which is basically a new passport with an additional DS 64 form