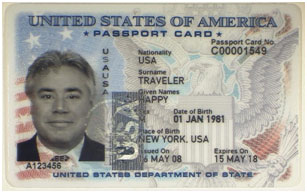 Are you looking to get a passport card? This is a question frequently asked by our readers. If you are traveling to Mexico, Canada, and the Caribbean as a U.S. citizen, you can use an alternative to the traditional passport book, such as a passport card.

A passport card comes in very handy because it is much easier to handle. You can put it in your wallet and not worry about carrying a bulky document.

Getting a routine or expedited passport card is simple with our step-by-step how-to guide on obtaining your card.

Where Can I Use a Passport Card?

It is imperative to understand what the is the difference between a passport book vs. card. You should know there are restrictions on a passport card.

Passport Tips: Carry both the card and the passport book in an emergency, and you need to fly home. The passport card is not valid for air travel.

Applying regular or expediting passport card is very simple if you follow the instructions below. First, you will need to gather the required documents for a passport card.

The passport card requirements are the same as applying for a new passport. Follow the instruction below:

Additionally, you will need to submit an appropriate passport photo for inclusion on your card. This will need to be a two-inch by a two-inch photo of the front of your head that accurately represents how you will look during your upcoming trip.

You will need to pay the appropriate passport fee, which will vary depending on the situation.

The standard processing time for a passport card can take between two weeks and four weeks, and one to two weeks to expedite a passport card depending on several factors, including the time of year that you apply.

A card is valid for ten years for an adult and 5 years for a child. Usually, the time frame is the same as a routine passport book 4 – 6 weeks to get your new card.

Step 1: Fill out the Application Form

The first step in obtaining a passport card is downloading and filling out the DS-11 form.

The new passport form gives you the option to get a passport card.

Once you have completed the passport form and selected the passport card, you will need to gather all supporting documents such as proof of citizenship, proof of identification, and passport photo. You will have obtained all the original documents and visit an acceptance agent to have an official federal witness your signature on your application. If you are using the form DS-11 ONLY for DS 82 application, an acceptance agent is not required.

You will need to package all your documents in a Tyvek envelope.

Include payment for the passport card, which should be made to the “Department of State.”

Be sure to write your full name and date of birth on the check.

Suppose you need to card the documents from you and take them to the nearest passport processing location. After paying an additional fee, an expedited passport courier service can have your passport card in your hand as soon as 24 to 48 hours. We recommend that you do your research on the company’s quality as reputation is very important in this industry. Feel free to contact us for recommendations.

What is a Passport Card?

Passport cards were largely designed to be a smaller, less expensive alternative to a traditional passport book. It serves the same purpose as a regular passport book in that it allows you to prove both your United States citizenship and your identity while you’re traveling around the world.

Instead of being a large book such as a passport book, a passport card is similar in size to a traditional credit or debit card like the kind you may have obtained from your bank.

It also contains a radio frequency identification chip, also commonly referred to as RFID, as a security measure to help protect against identity theft.

The card act as a fully valid passport for travel to destinations contiguous to the United States. They were created largely to make it easier for citizens of the United States who may live on the border between the US and another country. As a result, they can only be used when traveling between the United States and Bermuda, the Caribbean Islands, Canada, and Mexico. Though it will act as a completely valid passport for both land and sea travel to and from these destinations, it will not work anywhere else or if traveling by air.

Hello, you need a passport book in order to board an international flight, passport cards are only valid for travel by land or sea to Mexico, Canada and cruises

does it take 4-8 weeks as well. or is it quicker than a passport.

passport cards are used to travel by land and sea (driving to Can.) you cannot board an internationally flight with a passport card, you will need a passport book

Confusing. Can you or can you NOT use this card to fly to/from Canada from the US? One place it says it’s the same as a passport if traveling to/from any contiguous country (from US) and another place it says it is not good for air travel anywhere. Please clarify.

U.S. Passport Help Guide I am going on a cruise and wnat to get only the passport card. What happens if I have an emergency and have to fly home and don’t have the book?

yes it will be returned with your new passport

Do you have to send your passport book in? It’s still valid.

Hello, the passport card is $30, he will apply for a renewal passport using a DS 82 and follow all requirements, such as new photos, fees, DS 82 app, & mailing in the passport

Hello, in order to renew a passport you must compile a DS 82 app, current passport, passport photos and passport fees ($30 passport card). You will mail everything directly to the US Department of State address listed on your DS 82 app.

how do I renew my passport card?

My husband has a passport but is interested in a passbook card for future travel. How much is just the card? do I need to send in his passport to get the card? does he need pictures for the card? Where do I send it in PA?

How much would it be for the card and book?

hello im jack mercer do you have my passports in tack

Randy Randolph Your passport book will be returned with your new passport card, in order to get a passport card you still need to apply for a renewal. You can even write a letter to the US Dept of State reminding them to return your valid passport book.

U.S. Passport Help Guide mine is does not expire for another few years though

yes, it will be a renewal passport and on your DS 82 app check passport card

can i get a pp card too if i alreadty have a pp book for convience purposes only?

is he traveling by land, sea or air?

can my kid 7years old travel to Mexico with passport card?

yes passport card are valid for travel by land and sea

Can I re-enter the US from a Canadian ferry with a passport card? I’m a native born US citizen with a previous passport that expired many years ago. Traveling through Canada by car to take the ferry to AK.