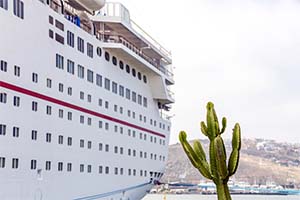 Most American travelers purchase a closed loop cruise when traveling to Mexico, which means that the cruise ship departs and arrives from the very same city port. A common example is a cruise line that leaves the port of San Diego, travels to Mexico, and returns to the same San Diego port some days later. In these cases, the passport restrictions are somewhat more relaxed.

Prior to 2009, U.S. citizens could easily gain entry back and forth between Mexico and the United States simply by providing a birth certificate or government-issued identification at the border. But times have changed, and a passport is usually required for re-entry into the United States by either land, sea, or air. The exception is in cases of a closed loop cruise. In these circumstances, the following documentation will be accepted by both the Mexican and U.S. governments.

For children under the age of 16, the same rules and regulations generally apply. However, in cases where the child is an infant newly born in a Mexican hospital, the official birth certificate may not be readily available. In these cases, a hospital-issued birth certificate will be acceptable for entry into the United States.

The above information is only for passengers of closed loop cruises. If for any reason the cruise is interrupted and the passenger is forced to re-enter the United States by land, air, or an alternative ocean vessel, then a U.S. passport will be required. Because of these types of unexpected circumstances, many travelers prefer to take a valid U.S. Passport even though it is not usually officially required. Also, exchanging foreign currency in Mexico is often easier and faster with a U.S. passport as identification.

Acquiring a passport can sometimes take a few weeks, but expedited passports can usually be easily acquired for an additional fee. Be sure to plan ahead based on your specific travel itinerary.